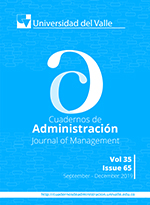 Financial Reporting Standards (FRS) are generally analyzed from the accounting, economic and financial perspective; this paper seeks to contribute to their understanding from the legal perspective. The objectives hereof are, first, to establish the legal nature of Act 1314 of 2009 from the theory of law, taking into account that decrees incorporate into the legal system the International Accounting Standards (IAS) and the International Financial Reporting Standards (IFRS) an approximation to its structure, in addition, to making explicit rules for interpretation applicable in Colombia. The second objective is to analyze in a simple random sample of concepts issued by the Consejo Técnico de la Contaduría Pública (CTCP per its acronym in Spanish-Technical Council of Public Accounts-), during the period 2013-2018, whether the rules of interpretation have been considered, to identify if there are normative gaps, conflict among rules or between rules and principles. The results allowed us to infer that: (a) the grammatical method prevails, (b) there are few cases formulated by absence or normative conflict, and (c) the presence of a principled model is not yet perceived by the structure of queries and concepts.

You may also start an advanced similarity search for this article.